The photosynthetic light phase of spiny cocklebur (Xanthium spinosum L.) plant was studied by JIP-test at different times (12, 36, 60 and 84 hours) after nicosulfuron and bentazon herbicides application. Results indicated that application of nicosulfuron had no effect on the most of chlorophyll a fluorescence parameters. But, application of bentazon significantly decreased photosystem II (PSII) activity via increasing minimum fluorescence and decreasing maximum fluorescence, variable fluorescence, the activity of the water-splitting complex on the donor side of PSII and especially maximum quantum yield of PSII photochemistry. Application of bentazon had a greater effect on the donor site than on the acceptor site of PSII by increasing absorption flux per reaction center and decreasing the values of efficiency through which the trapped electrons from RCs continue beyond QA and also by reduction of quantum yield for electron transport from QA- to PQ. Reduction in photosynthesis relative vitality (PI) by application of bentazon negatively affected reaction centers per PSII antenna chlorophyll, maximum quantum yield for primary photochemistry and the quantum yield for electron transport. In most case, the inhibitory effects of bentazon on PSII activity were recorded at 36 hours after herbicide application. Bentazon treatment decreased the rate of the electron transport chain and this was supported by increasing the photochemical de-excitation rate constant in the excited antennae of energy fluxes for photochemistry.

Among all herbicides which are used in crop protection, nearly 50% affect the chloroplast. Several herbicides such as benzothiadiazinones are known as inhibitors of photosystem II (PSII) activity (Cobb and Read 2010). Bentazon (Basagran, SL48%) which belongs to the benzothiadiazinones is a very strong inhibitor (Grumbach 1982). This herbicide is used for the control of broadleaf weeds in crops such as corn and soybean (Cobb and Read 2010). Apart from inhibiting electron transport, many herbicides have more than one side of action. Photosystem II inhibitor herbicides like bentazon also alter chloroplast ultrastructure and pigment composition (Grumbach 1982). Nicosulfuron (Cruz, SC4%) is a sulfonylurea herbicide being considered for registration for post-emergence weed control in crops such as corn (Williams and Gilham 1990). Sulfonylureas are a class of herbicides that inhibit the activity of acetohydroxyacid synthase/acetolactate synthase and decrease the synthesis of valine, leucine and isoleucine as the branched- chain amino acid (Ray 1984; Cobb and Read 2010).

Many stresses such as herbicide application on plants can affect the photosynthetic activity of leaves and change the ChlF parameters )Oukarroum et al. 2007; Kalaji and Guo 2008; Hassannejad et al. 2020). ChlF analysis as a rapid, non-intrusive  and  inexpensive  method,  provides

detailed information on the energy flow in the photosynthetic apparatus (Oukarroum et al. 2007). This method can be used for understanding the stressful effects of herbicides on weeds (Hassannejad et al. 2020). Thus, the purpose of this experiment was to evaluate the photosynthetic light phase by JIP-test of chlorophyll a fluorescence in spiny cocklebur (Xanthium spinosum L.) plants as a noxious weed species present in corn (Zea mays L.), soybean (Glycine max L.), and some other summer crops after post-emergence application of nicosulfuron and bentazon herbicides.

A pot experiment using a randomized complete block design with three replications was conducted in the glass greenhouse conditions under natural light (27-32 °C) in the University of Tabriz in 2017 to assess the effect of nicosulfuron and bentazon herbicides on spiny cocklebur (X. spinosum L.) chlorophyll a florescence (ChlF) parameters and PSII activity. Fifteen seeds of spiny cocklebur were sown in each plastic pot (20 × 20 cm) containing 1.0 kg of perlite at a depth of 1 cm and then tap water (0.6 dS m-1) was added to achieve 100% field capacity. Plants were thinned to 5 plants per pot, after seedling establishment. The losses of pots were made up with Hoagland solution (Electrical conductivity =1.3 dS m-1 and pH= 6.5-7) and every 20 days, water was added to prevent further increase in the electrical conductivity. Herbicides were applied at the 4-5 leaf stage of spiny cocklebur at the recommended dose in the field as 2 L.ha-1.

ChlF parameters from the upper surface of spiny cocklebur leaves were monitored with a handy-PEA portable fluorometer (Hansatech, UK) after 12, 36, 60 and 84 hours of herbicide application. This device has software for calculation, numerical presentation and memorization of chlorophyll a fluorescence parameters (Table 1).

All the data were analyzed based on the experimental design, using SAS 9.1 software. The means of each trait were compared using Duncan’s multiple range test at p≤ 0.05.

Variable fluorescence (Fv) was reduced after

Figure 2. Changes in Fv/Fm (a) and Fv/F0 (b) of spiny cocklebur (Xanthium spinosum L.) after 12, 36, 60 and 84 hours of nicosulfuron and bentazon herbicides application.

Sm and Sm/Tfm were significantly increased with the nicosufuron application. But, bentazon reduced Sm and it was not recovered after bentazon application (Figure 4a, b). Sm declined after 36 hours of the bentazon treatment and then remained unchanged (Figure 4a). However, the effect of bentazon on Sm/Tfm was not significant (Figure 4b).

Figure 3. Changes in Fv (a) and Area (b) of spiny cocklebur (Xanthium spinosum L.) after 12, 36, 60 and 84 hours of nicosulfuron and bentazon herbicides application.

Figure 4. Changes in Sm (a) and Sm/Tfm (b) of spiny cocklebur (Xanthium spinosum L.) after 12, 36, 60 and 84 hours of nicosulfuron and bentazon herbicides application.

nicosulfuron on PI was observed at 36 hours after

the herbicide application and after that time, this variable was not recovered significantly (Figure 5b).

The effect of both nicosulfuron and bentazon herbicides on other ChlF parameters was presented as a spider plot graph in Figure 7. Bentazon increased Fv at 2 ms (Vj) and especially increased the absorption of ABS/RC, and with increasing the time after bentazon application, these effects were more pronounced. In contrast, this herbicide decreased ET0/RC, ѱE0, φE0 and φR0.

Figure 5. Changes in Tfm (a) and PI (b) of spiny cocklebur (Xanthium spinosum L.) after 12, 36, 60 and 84 hours of nicosulfuron and bentazon herbicides application.

Figure 6. Changes in KP (a) and KN (b) of spiny cocklebur (Xanthium spinosum L.) after 12, 36, 60 and 84 hours of nicosulfuron and bentazon herbicides application.

However,   the   application   of  nicosulfuron did not affect the JIP parameters.

The lethal effects of an herbicide in higher plants depend on the particular side at which a physiological reaction is inhibited in a plant cell and its compartments. In the chloroplast, there are two main target sides of the herbicide action. One target is represented by the electron transport chain with its electron carriers and enzymes which are involved in phosphorylation and NADP photo-reduction. Another main target of the herbicide action is the biosynthesis of chlorophylls and carotenoids that are contained in the light-harvesting complex and the antennae of the photosynthetic reaction centers (Hassannejad et al. 2020; Baghbani et al. 2019). In our research application of bentazon in comparison with nicosulfuron strongly influenced PSII activity of spiny cocklebur plants. Bentazon enhanced F0 but decreased  Fm  of   plants   Figure 1). F0    is    the

electron acceptor pool is fully oxidized and it may change upon exposure to stresses (Fracheboud et al. 2004). An increase in F0 can be interpreted as a reduction of the rate constant of energy trapping by PSII centers, which could be the result of a physical dissociation of light-harvesting complex from PSII core observed in several plant species under environmental stresses (Rong-hua et al. 2006). Reduction in Fm under bentazon application (Figure 1b) may have caused by the inhibition of electron transport at the donor side of the PSII (Hassannejad et al. 2020), which resulted in the Tfm decrease (Figure 5a).

the effects of bentazon on the density of reaction centers per PSII antenna chlorophyll, maximum quantum yield for primary photochemistry and the quantum yield for electron transport (Hassannejad et al. 2020).

Bentazon strongly increased Vj and ABS/RC but decreased ET0/RC, ѱE0, φE0 and φR0 (Figure 7). As the ѱE0 values of bentazon samples were low, the electron carriers could not transfer electrons to the next step of the electron transport chain (Joshi et al. 1995; Toth et al. 2007; Lotfi et al. 2018;Hassannejad et al. 2020). After bentazon application, the PSII acceptor side was limited more than the PSII donor side as Lotfi et al. (2018) showed after humic acid application in rapeseed plants.

Bentazon belongs to the benzothiadiazinones and are known as PSII inhibitors and Nicosulfuron belong to the sulfonylurea a class of herbicides that by inhibiting the activity of acetohydroxyacid synthase/acetolactate synthase decreases the synthesis of branched-chain amino acids. According to the mode of action of the used herbicides, nicosulfuron did not affect the photosynthetic activity of the spiny cocklebur samples. However, bentazon strongly destroyed the photosystem II activity of spiny cocklebur. The donor side of PSII was more sensitive than its acceptor side to bentazon. This claim was supported by an increase in ABS/RC and a decrease in ѱE0 and φE0. After 12 h of bentazon application, the PI was close to zero and after 36 h the photosynthetic activity was completely destroyed.

The authors declare that they have no conflict of interest with any organization in relation to the subject of the manuscript. 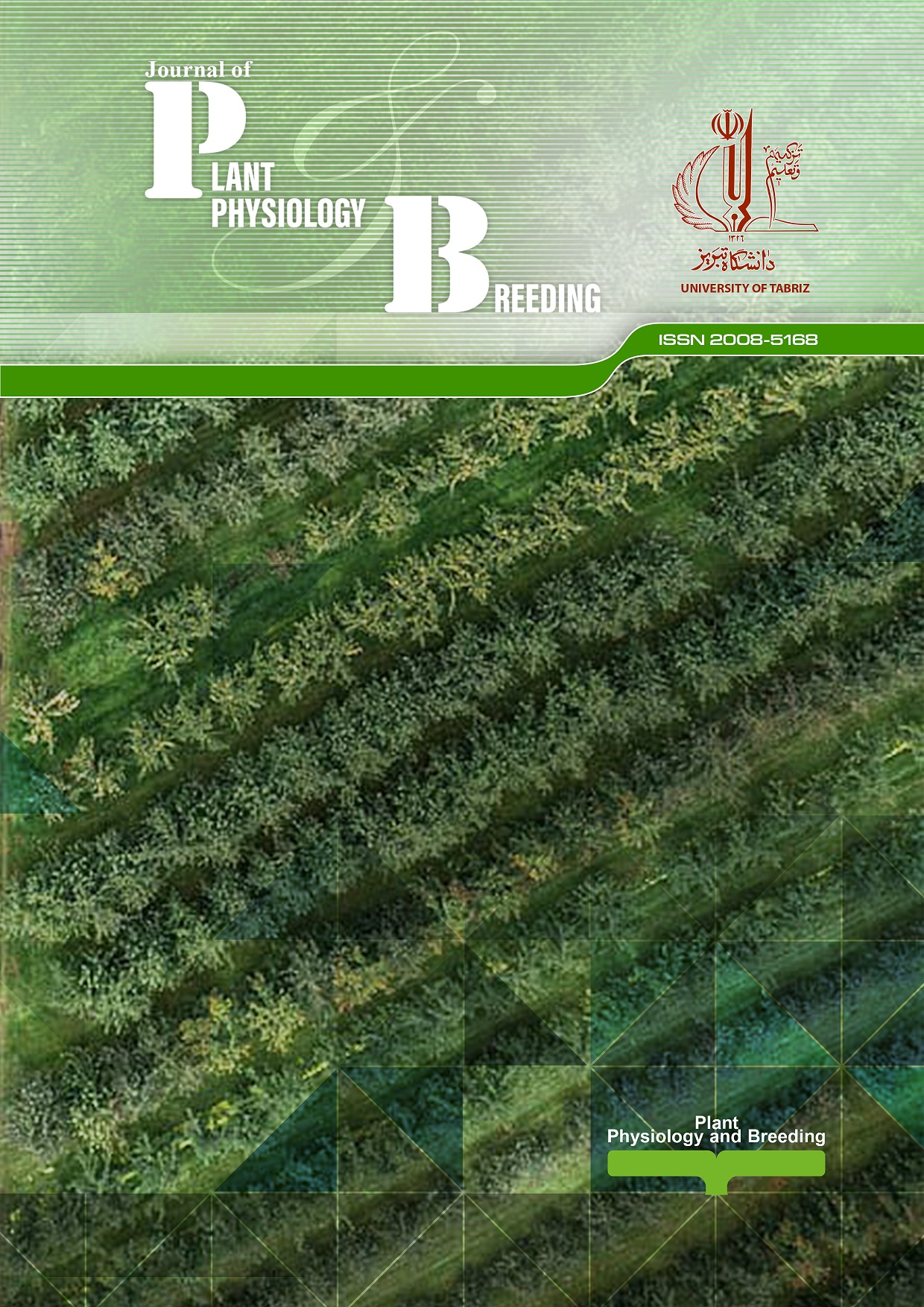